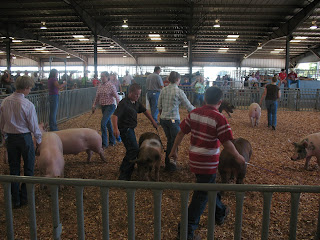 I had to stifle laughter as I watched the "fitting and showing" judging of swine at the fairgrounds arena this morning. Hogs are ornery and independent, and by 9:30 in the morning they were more in the mood to nuzzle and nibble the wood chips on the arena floor than pay any attention to what their "handlers" (and I use that term very loosely) wanted them to do.
The 4-Hers were using riding crops to try to control their animals. When I was in 4-H, we used wooden canes. Not that they were very useful, though I guess the crook of the cane could come in handy for tugging rooting snouts out of the dirt.

One boy's hog made himself at home on the wood chips and wouldn't budge for anyone or anything. Not squirts of water, not knees in the ribs, not metal panels that fair volunteers used to separate pigs grappling with each other (or, as I put it, sparring spare ribs of the future). Yes, that's him glaring at my camera after they finally roused his porker from a prone position. 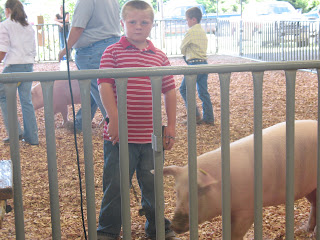 In some projects, such as foods and photography, the non-winners get a yellow "participant" ribbon. Ouch. "Thanks for coming, but...."

Anyway, I wish I'd had my video camera rolling for the entire junior fitting and showing competition. The animals were bigger than some of the children in the arena (you have to be 7 before you can join 4-H), and some of the hogs were determined to root and root and root with their noses 'til they had a comfy place to flop in the shade. Makes sense on a hot summer day - but not in the arena during the fitting and showing competition.

That may seem like no big deal - after all, they are pigs - but one of my enduring memories of 4-H fairs was getting up at the crack of dawn to wash your two hogs entered in the swine competition, and then using baby oil and baby powder on their hides to make them glisten. Why? So we can make hogs look good!!!
But, to me, hogs look best as bacon, ham, barbecue ribs......
Posted by Stan at 10:03 AM