Dustin' off the ol' fedora

The first day of fall that I wore a fedora.

I think that's the latest I've ever gone in a calendar year before I donned the dapper dome decoration. I guess that speaks volumes about how warm it's been in Wichita and much of Kansas this fall.

I've become known for my hats...not because they're outlandish, but that I wear them at all. If I'm not wearing a hat, folks around Wichita ask me "Where's your hat?"

I never meant for it to become my signature (or, at least, one of them). I simply wanted to keep my head warm (and dry) with something that had a little style.

But now my head feels almost naked without some sort of haberdashery aboard. I've probably funded half of Hatman Jack Kellogg's retirement villa outside Vienna (if he has one).

No wonder he smiles whenever he sees me walk through the door of his shop in Delano. I've filled two hat racks at home, between fedoras, straw hats and lids I wear for hiking or doing chores.

I'm told I take after Grandpa Pechanec in that regard. No wonder Mom gets such a big smile on her face whenever she sees me decked out in a fedora.

Must be in the blood.
Posted by Stan at 6:36 PM No comments:

The woman approached my father and I as we talked on the front steps of the Catholic church after Mass had concluded. They didn’t hear English very often in Holtzwihr, a tiny village nestled between the Rhine River and the Vosges Mountains in eastern France, and she was curious why we were there.

He had been here with the U.S. Army during World War II, Dad told her, and he had returned in search of answers – and healing.

The woman, a teacher, reached out and gave Dad a hug.

“Thank you,” she said. “If it weren’t for you, we would be speaking German.” 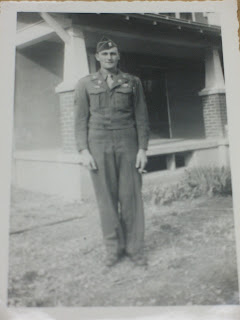 Over the next few weeks, in France and Germany alike, others would approach my father to express their gratitude for what he and his fellow American soldiers had done in freeing Europe from Hitler and Nazism. Some of them had lived through it. Many grew up hearing about it from their parents or teachers, grew up in a free country because of what Dad and so many hundreds of thousands of his compatriots had done.

In Germany, particularly, professors and postmen and farmers dropped what they were doing to help an American soldier in the twilight of his life try to make peace with a war that had never really ended inside of him.

Dad genuinely appreciated the kind words and the help we were given. But a sense of disappointment clouded his eyes as our journey stretched on.

In his mind’s eye, he could still see the shattered cities, the wrecked railways, the roads ravaged by bombs and tanks. In their place, nearly 60 years later, were regions humming with activity and prosperity.

After a few days in Germany, he said “They live about as well as we do.” In other words, their standard of living was comparable to the U.S. One of his company’s final hard fights was in the Nazi stronghold of Nuremberg in the waning days of the war. Dad missed that battle because he was in a hospital back in Nancy, France, battling pneumonia he had contracted after inhaling poison gas that was rigged to be released when American troops reached the basement of a large building in Bamberg.

But he had heard the stories and seen the photos of the destruction of Nuremberg, and after a day of touring the city, he said, “It’s like we were never here at all.”

I tried to tell him Germany’s recovery was necessary for the long-term stability of Europe so we wouldn’t have a repeat of the economic and social upheaval that had created an environment for a movement as poisonous as Nazism to thrive. But I could tell my words didn’t really reach him.

It was as if he had hoped to see rubble – a tangible reminder of what they had done…what they had had to do to end this second of world wars.

And it was nowhere to be found. 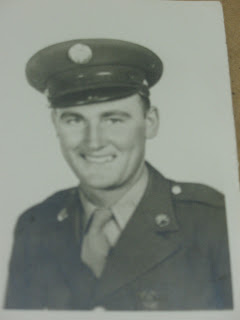 Not long after we returned from that trip, Dad mentioned he was going to meet with a local veteran who had recently returned from serving in Iraq to see how he was doing. In other words, check to see if he had any post-traumatic stress issues from combat.

When I asked him about that several months later, he said he wasn’t doing it any more. That surprised me, so I asked why. He had talked with a couple of Gulf War veterans, he said, and they told him what it had been like. When they asked him what it had been like in World War II, “they wouldn’t believe me. ‘It couldn’t have been that bad,’” one of them said. Well, if they don’t want to believe me, I won’t talk to them.”

Dad rarely spoke about his experiences in World War II. His unit, Company B of the 15th Infantry Regiment, Third Division, suffered the loss of at least 500 men during his three months of front-line duty alone.

He had at least a half-dozen close calls, including being spun around by machine gun bullets on the Seigfried Line, being flattened by the concussion of artillery fire and .88 shells, being briefly paralyzed while on a special mission 35 miles behind enemy lines – so he wasn’t about to tolerate mocking, even from a new generation of soldiers.

They didn’t understand what it was like back then.

Not even members of his own family could believe what Dad shared about what he went through. That really hurt him, Mom said. He didn’t lie, because he knew there were repercussions. Your word was your bond.

When officials organizing the official dedication of the World War II memorial learned Dad’s company commander was Audie Murphy, the most decorated soldier in U.S. military history, they desperately wanted him to be in Washington for the ceremony. They even wanted to make him part of the festivities.

And so he didn’t go.

But he wanted to see the memorial one day. It was high on his list of trips to take while his health was still good – along with another trip to Germany to revisit the town where he had been paralyzed behind enemy lines.

He never got to make those trips. He suffered a stroke the day after he returned from a cruise to Alaska with our mother, the love of his life, in September 2006. We lost him a week later.

When I read about the “honor flight” that carried a few dozen World War II veterans from Kansas to the World War II Memorial last month, I couldn’t help but think how much Dad would have enjoyed that.

He would have relished talking to the other veterans, listening to their stories, nodding knowingly. Any of them who fought in Europe wouldn’t have doubted Dad’s account of what he went through. They’d been there, too.

And they would have understood.
Posted by Stan at 1:38 PM 1 comment:

A few days in England

Compelling column by a friend of mine about Pope Benedict XVI's visit to England:

The wrath for Khan ---- in many languages

I found myself watching "Star Trek 2: The Wrath of Khan" this afternoon. It may be the best Star Trek movie of them all ---- and I say that even though I enjoyed the newest one quite a bit.