A city that survived its own death

I spotted this image in a video clip of Warsaw soccer fans paying tribute to the courage and valor of their descendants recently. Given what that city endured in World War II, I found it very moving. 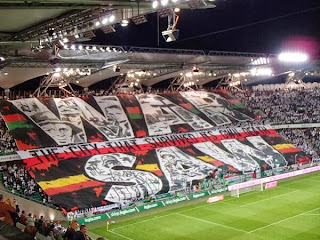 The Nazis bombed Warsaw mercilessly in the opening weeks of World War II in September 1939, badly damaging the beautiful city steeped in history. But it didn't end there.

The Nazis decided to eliminate all Jews in Warsaw - first by herding them into a "ghetto," then systematically shipping them to extermination camps. The Jews eventually fought back, however, in what became known as the Warsaw Ghetto Uprising.


The Polish resistance group Zegota worked tirelessly to rescue Jewish children from the ghetto. Irena Sendler recognized that the children would be killed if they weren't smuggled out of the ghetto, so she devised an elaborate system to extricate as many children as she could.

Her remarkable efforts saved 2,500 children until she was arrested by the Gestapo in 1943. She endured brutal torture without giving any details of the rescue network and was condemned to death - surviving only because the Zegota bribed a guard to set her free just before her execution.

Her story remained largely unknown because Poland spent decades behind the Iron Curtain. The Soviet Union wanted no one who was not Russian or a Communist to be portrayed in heroic fashion. It wasn't until after the Iron Curtain fell that a group of students from a small Kansas high school spotted her name in a magazine article while looking for a project to enter in the National History Day competition.

The rest, as they say, is history. I'll let this documentary tell the rest of the story.

A bit of a disclaimer here: I was assigned to write a story about how Kansas schools fared at the National History Day competition in Washington in 2000. Uniontown didn't win, but as a state historical society official talked to me about "Life in a Jar," I wanted to learn more. I talked my editors into letting me do a story about the students and the project. When I spoke to Elizabeth and Megan and Sabrina, they told me they would do a couple more performances of the play for friends and relatives and then tuck it away, changed forever by that brave woman in Poland.

But my story was picked up by the Associated Press and received wide distribution, prompting numerous requests for performances. Soon, they were doing the play at a synagogue in Kansas City (mentioned in the above documentary).

Their trip to Poland to see Irena became national news there, coming just as the country was wrestling with painful revelations about natives collaborating with Nazi atrocities. Irena became a hero they - and the world - could embrace. Her story of selfless bravery and indomitable courage was timeless and universal.

I would write several more stories about the "Sendler Girls," as I came to call them. This was one of my favorites.

The reporter who normally writes stories touching on history for the Eagle was gone that day in 2000 when my editors wanted a short story about how Kansas schools fared at National History Day, so it was given to me because they knew I love history. I considered it a routine assignment....until I heard about Irena and "Life in a Jar."

It still amazes me when I think about how much happened after that. But Irena and her "girls" deserve all the credit. Heaven knows the world needs the inspiration of their example.