Quiet, but not idle

I seriously need to get better about blogging more regularly. I don't do New Year's resolutions, but if I did, that would be one of them.

My silence on my blog doesn't mean I haven't been writing, though. I'm working through a fresh edit/touch-up of my first murder mystery (I've already finished a sequel and started on the third book in what is shaping up to be an ongoing series) and I've also completed a sequel to FALLEN TREES, which I just sent to an editor for review.

Speaking of FALLEN TREES, I'm about to start recording an audiobook version at a local studio with voice talent eager to do to the project. I'll relaunch the print version when the audiobook is ready.

The muse is having fun touching up the murder mystery and I'm also eager to get back into the third installment, which in my mind could be the best yet.

Unlike many writers, I enjoy the editing process, because to me it's an opportunity to polish and improve the draft. The most fun is always talking to readers about the book, just to hear them talk about it.

Writers of the Wheat, a group of Kansas authors, is hosting "Christmasland" on Friday from 4 p.m. to 9 p.m. at the Sunflower Plaza, 417 E. Gilbert, just south of downtown Wichita. Sunflower Plaza is 3 blocks south of Kellogg and 3 blocks east of Broadway.

Come meet Sunflower State writers, pick up some goodies and browse a wide range of genres and offerings for the readers on your gift list. Admission is $3, and we guarantee you won't leave empty-handed!

I'm looking forward to seeing you!

Spring is around the corner - and for Tornado Alley residents, that means "be prepared"

I spent decades as a newspaper reporter and still do freelance pieces on occasion - including the one I'm sharing below for those who do not have a subscription to the paper in which it appeared. I'm doing it as a public service, since it includes information on safety and preparation for the possibility of severe weather. Prepare a safety plan that works for you...

While the recent record-shattering invasion of arctic air may be still fresh on many people’s minds, some meteorologists are taking a closer look at what spring will be like.

What they’re seeing is a bit unsettling: the atmospheric conditions across the northern hemisphere for this spring closely resembles 2007 and 2011 – years that produced rare EF5 tornadoes, the strongest on the Enhanced Fujita Scale used to measure the strength of twisters.

A record 216 tornadoes touched down from Canada to Texas on April 27, 2011, including four EF5s. The outbreak claimed 348 lives. A month later, another EF5 tornado swept through Joplin, Mo., killing 161 people and injuring more than 1,000 in the deadliest single tornado in the U.S. since records began officially being kept in 1950.

In Kansas, a tornado nearly 2 miles wide essentially wiped Greensburg off the map on the night of May 4, 2007, killing 11 people and injuring almost 70 others. The tornado was the first EF5 recorded under the revised Fujita Scale and the last tornado in the state to earn the scale’s highest rating.

That history is what makes some Kansas officials nervous about 2021.

“I’m definitely concerned about what this storm season has in store for us,” said Keri Korthals, emergency management director for Butler County, which was hit by the last F5 in Kansas prior to Greensburg, on April 26, 1991.

That tornado killed 17 people – 13 of them in the Golden Spur Mobile Home Park – and led to the creation of an emergency management department in Butler County.

“Historically in Kansas, it seems like our weather likes to lull us into complacency before bringing out the big sticks,” Korthals said in an email response to questions. “It gives us a string of mild seasons that make us forget how bad it can get, and then…”

Last year was astoundingly quiet for Kansas and Tornado Alley as a whole. Only 17 tornadoes touched down in the Sunflower State in 2020, the lowest total in more than four decades.

For the first time since official records began 70 years ago, not a single tornado touched down in the 26 counties of southeastern Kansas included in the warning area of the Wichita branch of the National Weather Service. Not only were there no tornadoes, there were no tornado watches issued by the Wichita office.

“I’ve heard multiple people use the phrase ‘we’re so overdue,’” Korthals said. “And that makes the hair stand up on the back of my neck a little bit, wondering if we’re to the ‘big stick’ year yet.”

“And given that we’re still in our COVID response phase, that makes it even more unsettling, since that adds an extra layer of difficulty to sheltering, responding and so on if we do have a bad season,” Korthals said.

Despite the correlations to years that produced rare top-of-the-scale tornadoes, AccuWeather is not predicting an unusually active year for Kansas. Instead, just as in 2011, the southeastern U.S. is projected to see a surge in tornado totals.

High pressure linked to drought in the southwestern U.S. will spread into western Kansas this spring, pushing storm systems east of Kansas, said Paul Pastelok, a long-range forecaster for AccuWeather.

“There may not be a lot of precipitation for your area when the fronts come through,” Pastelok said in an email response to questions. “I am leaning toward Dixie Alley, rather than Tornado Alley, this spring. Moist air from the Gulf of Mexico may have a hard time consistently reaching back into the Plains this spring.”

A CAUTION AGAINST COMPLACENCY

But forecasters and emergency management officials caution against complacency in Kansas. All it would take is “one big one” to hit a populated area and make this year a bad one, said Jeff Hutton, warning coordination meteorologist for the Dodge City branch of the National Weather Service.

“I would bet it will be plenty active in Kansas as far as severe weather,” Hutton said in an email response to questions. “For the number of tornadoes? That will all be completely dependent on each individual severe weather day. There is no scientific skill in predicting that number.”

There was no shortage of strong thunderstorms in Kansas last year, Hutton said. What was missing were the final ingredients needed to initiate tornadoes.

“The thought of severe thunderstorms and tornadoes is not on the forefront of many minds,” Stimson said in an e-mail response to questions. “With the recent cold weather and on-going pandemic, the thought of a tornado striking the area is an unnerving thought — exactly why we must begin preparing now.

“We have already seen major tornado events in the U.S. in the midst of the pandemic, demonstrating the urgency to prepare simultaneously to the threat of severe weather while continuing COVID precautions,” she said.

This includes sorting out where to take shelter if you’re at work or school, updating your emergency supplies kit, and ensuring you have multiple ways of receiving emergency alert notifications — even during power outages.

HOW TO BE PREPARED

Now is a good time to review and safeguard important documents that can help start recovery right after a disaster: 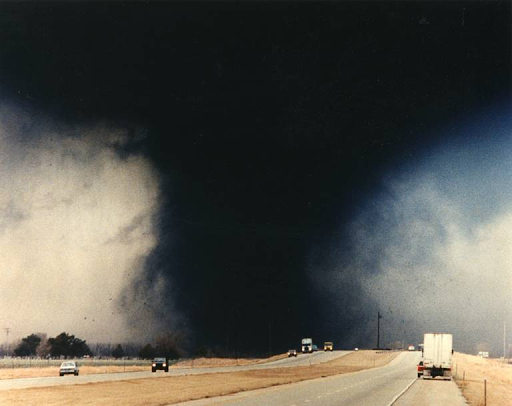 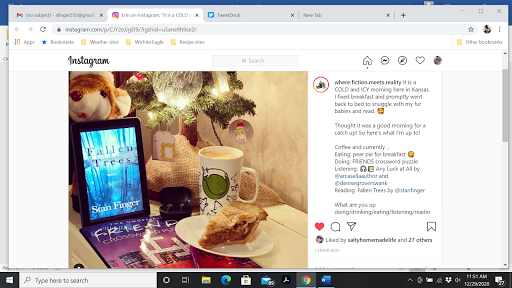 I finally stopped dragging my feet.....

.....and now have a website featuring my books. I welcome your reactions!

Tina Leitzel designed it for me and I can't recommend her enough for not only her skill but her patience with all my questions and suggestions. She's designed it so it can expand as (hopefully) more of my books are published.

I hope to add fresh material over time as well. This is both a culmination and a new beginning for me, and I'm excited about where it can lead......

As the finish line nears, I look back and can see how fortunate I have been in so many ways. I have managed to avoid getting COVID (or if those allergies were actually COVID, I escaped with a mild experience with it), loved ones who came down with it have survived (thus far) and for the most part I was able to keep busy with freelance work.

I even managed to fine-tune a couple of novels and nearly finish the sequel to FALLEN TREES.

The muse has much more it wants to do as well.

If nothing else, 2020 has reminded us to take absolutely nothing for granted. It's reminded us what really matters. I hope those two lessons stick with us as we move into 2021, realizing that we're not out of the woods yet and once we reach that clearing, the world will be forever a different place. 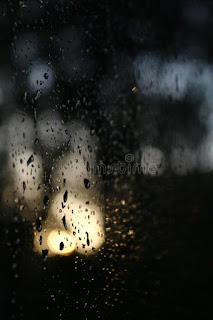 The other night as I was getting ready for bed, I found myself listening to rain drops slapping a gutter.

It was a distinct sound that cut through the urban noise clutter...and before I knew it this wonderful tale started spooling out in my imagination. Such moments are magical and I hope to turn it into a short story or novella soon.

I share this because it's a reminder that you never know when inspiration might strike: in the shower, on your daily commute, while walking the dog or watching your children sleep.

Whatever it might be - a string of musical notes, some song lyrics, a poem or a scene from a future book - find a way to remember it and respond. It's your creative side at work and the more you nurture it the more it will give you.

And, speaking from experience, there's something intangibly enriching about listening to those prompts.

So give those surprises room to blossom. You'll be amazed at what can happen.